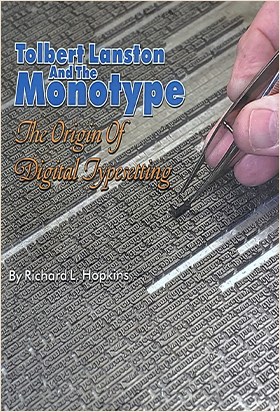 Tolbert Lanston and the Monotype

By Richard L. Hopkins. Published in 2013 by the University of Tampa Press. 192 pages plus eleven appendices and a full index. Sized 8 1⁄2”x 10 1⁄2”. Over 300 illustrations, many in color. Thoroughly referenced with hundreds of footnotes providing resources plus explanations.

There are several books detailing Ottmar Mergenthaler’s journey in developing his Linotype machine. But Tolbert Lanston, an American Civil War veteran, has remained a poorly documented hero of the typographic revolution. His Monotype System was the very first digital concept put into daily use in typesetting plants across the globe. The Monotype was a groundbreaking precursor to the computer revolution in the typesetting industry, though it was introduced over seventy years before computerized typesetting systems were developed.

The American Lanston Monotype Machine Company of Philadelphia had a tremendous presence in the printing industry, offering not only typesetting equipment but a wide range of photolithographic cameras and other devices. Because of its premature death at the hands of corporate raiders (a full twenty years before its sister organization in England perished) little now is known and less has been written about its existence.

There is a smattering of statistics and there are some technical details, but the essence of this volume is to bring to life the people who made it all happen. There is a conscious effort to show the Monotype in its practical, day-to-day operation, and to explain how the Lanston Monotype company developed, rose to great prominence, and then died a miserable death. Surprising details are unveiled, considering that the Lanston company has been gone for nearly half a century.

This book is available from the University of TampaPress.