The American Typecasting Fellowship began in 1978 as a group of enthusiasts, amateur and professional, interested in all aspects of the making of metal type. It continues today as the group central to what is becoming a renaissance of typefounding in America in the 21st century. 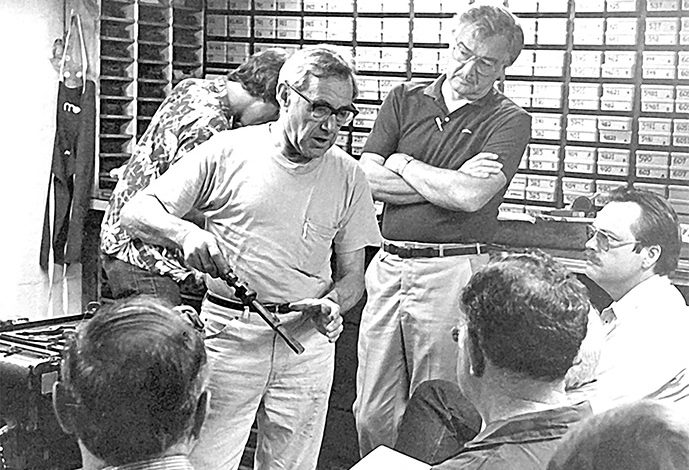 It is an unusual organization. It has no institutional structures whatsoever. Its bylaws, such as they are, were written primarily by the late Harold Berliner (a private typefounder, printer, and attorney better known as the co-author of the California version of the “Miranda Warning”). The ATF’s by-laws, as “scribbled on the back of an envelope” in 1978, are:

Article I. The name of this association is the American Typecasting Fellowship.

Article II. There will be no officers of this association.

Article III. There will be two committees: a meeting committee and a communications committee.

Article IV. There will be no dues and the committees are urged to use their imagination in raising what little money they need for expenses.

Article V. There will be no other by-laws.

The name of the ATF was a deliberate echo of the “other” ATF, American Type Founders Company (which was still in business at that time).

From the beginning, the role of the Communications Committee has been filled by Rich Hopkins (Hill and Dale Private Press and Typefoundry), who has published the ATF Newsletter on an irregular but consistent basis.

Although the focus of the ATF is on typecasting, it has always welcomed linecasters (Linotype/Intertype, Ludlow, etc.) As one Linotype enthusiast explained: “When I attended my first ATF Conference in 2010, I was at that time entirely a linecaster, but I was always made to feel at home.” The Newsletter has over the years published a number of very important articles on this history and technology of linecasting. 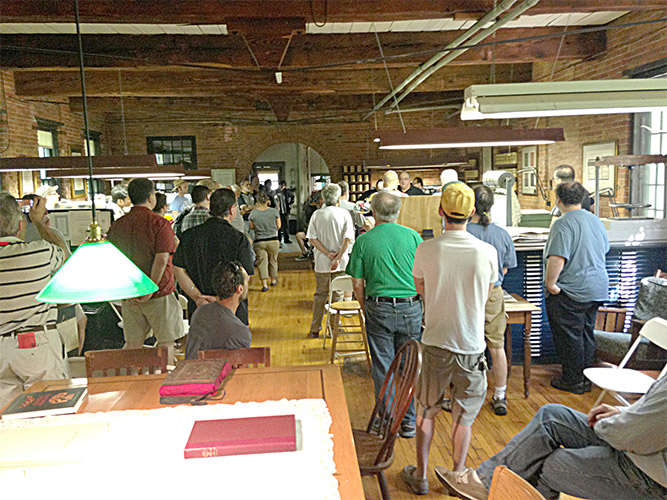 Conferences most often are scheduled nearby to existing shops, such as that of Winnie & Michael Bixler in Skaneateles, NY in 2014.

This logo was cast into type (black & white only) and distributed as a keepsake for an early ATF Conference. The intertwined ATF design was stolen from the 1912 American Type Founders Catalog.

As befits a group with so little institutional structure, it is often very difficult to discover information about the ATF.

There are no dues as such, but Rich asks for contributions to cover his costs in printing and mailing the Newsletter (which is always beautifully produced). US subscribers are asked to keep a balance of at least US $20 with him (double that for non-US). U.S. currency, please. Rich still maintains the “official” mailing list but indicated a desire to pass the Newsletter to another editor-publisher in what he threatened as his “last” issue, No. 43, published in 2020. 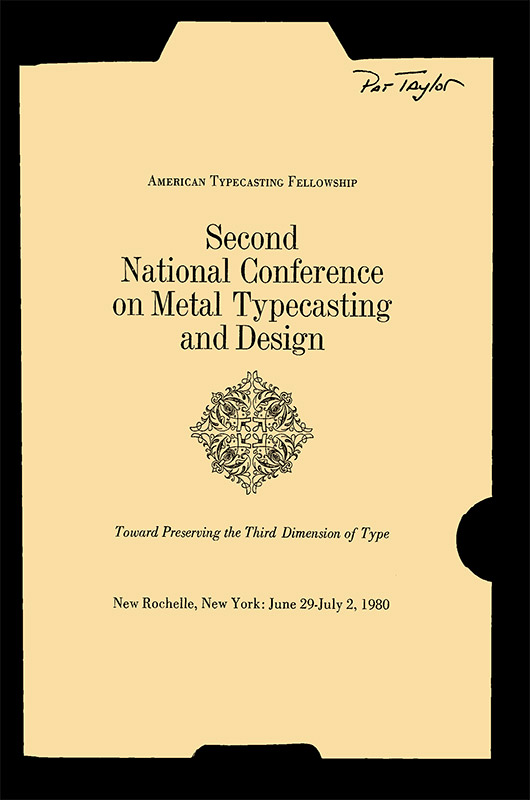 Above is the title page of the Conference Program for the second meeting in 1980. The entire booklet was diecut to mimic the side view of a piece of type

ATF has pursued the goal of having a Conference every even year and that record continued from 1978 until 2018. The 2020 conference, scheduled for Wisconsin, was cancelled because of the coronavirus pandemic. However plans are afoot to reschedule that meeting as soon as possible.

The ATF is the heart of type-making today. Its members are involved not only in casting type by hand and every kind of machine (Thompson, Monotypes, Barth, and Küco, at least) but also in hand punchcutting, machine punch and matrix engraving, matrix electroforming, matrix justification, and, indeed, every aspect of the making of cast metal type. If these are your interests, you should join.

This article with some editing was first published by Dr. David MacMillan. For additional information please contact American Typecasting Fellowship 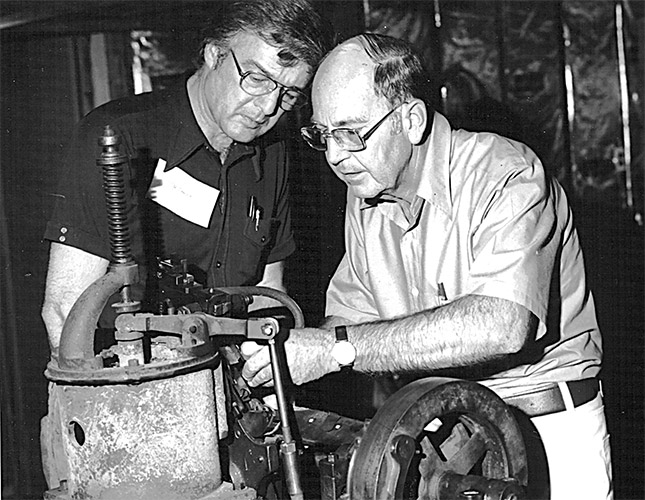 In 1978, Pat Taylor and Andy Soulé completely assembled and cast type using an ancient Pivotal Typecaster, hauled to the meeting by Taylor. strapped to the roof of his compact car. 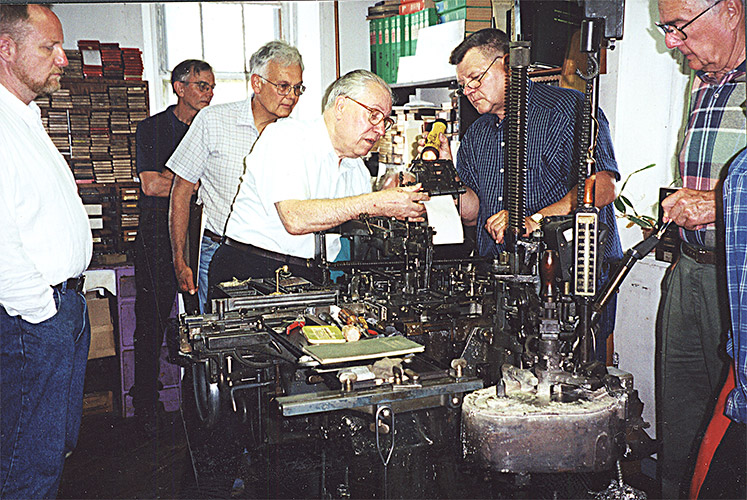 Gerry Drayton, long-time keyboard instructor at the Monotype School in England, shared his knowledge at the 2000 meeting. 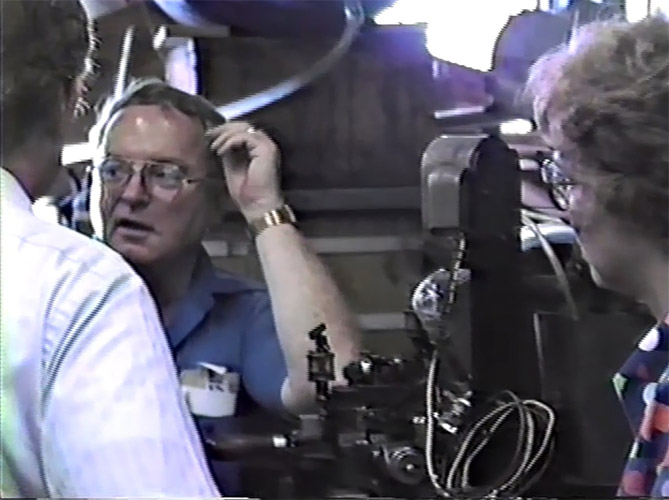 Where else would you find a guy leaning on a Thompson Typecaster? Paul Duensing at the 1986 meeting.