Herewith are several photographs depicting the setting up of this John Dunlap document into metal types by Rich Hopkins of the Hill & Dale Private Press and Typefoundry. He has utilized metal types much in the same way as done by the John Dunlap crew July 4, 1776, when the first setting and printing were completed. The principal difference is that for this work, prior to assembly and printing, Rich also had to cast every piece of type included in the document utilizing Monotype typecasting equipment in his basement shop. For the original printing, Dunlap utilized type imported from William Caslon’s foundry in England. 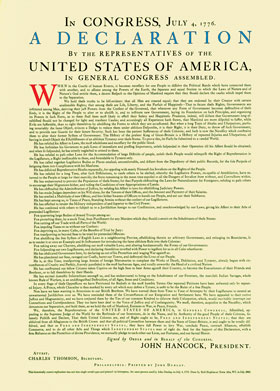 Every single letter in the document was cast into metal excepting the initial letter “W” which, in this instance, is a copper photoengraving. Most likely, Dunlap used a wood type character for this large initial. Rich now has done the Dunlap version of the Declaration of Independence several times, with his work being utilized at the Newseum in Washington, D. C., at the Ben Franklin Printing Shop in Philadelphia, at the Crandall Printing History Museum in Provo, Utah, and others.

The body of the Declaration was cast utilizing the Monotype Composition Caster. The Matrix Case shown bottom left includes all the long s characters—items Rich sought for over 40 years before acquiring all that were needed for historically accurate projects of this nature.

In order to cast several of the larger characters including the long s character and its ligatures, Rich utilized original American Type Founders matrices. Many of these matrices were imported from the Caslon foundry in England by the L. Johnson Type Foundry of Philadelphia around 1860. Rich acquired these historic items in 1992 with the liquidation of American Type Founders. 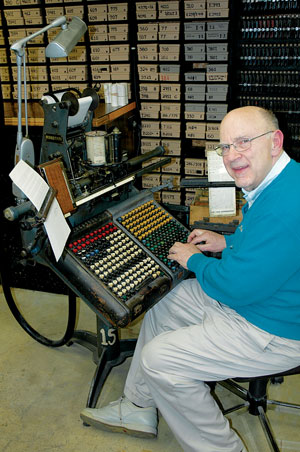 At right is an ATF matrix for the long s character along with several casts made from it on the Supercaster. The age of the matrix is revealed by the “2E” marking thereon, indicating “Double English,” a size designation utilized before the adoption of the American Point System around 1886. That size is roughly 28 points by the American system.

Next are shown large characters as cast on the Supercaster in the 72-point size. The “cored” nature of the bodies is evidenced upon looking at the side of the characters as seen here. 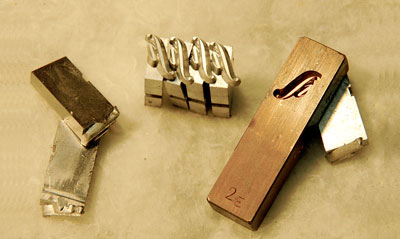 On his first production of the Dunlap Declaration, Rich utilized the Monotype Keyboard. Perfected around 1907, the device is “blind.” That term indicates that the operator has no visual representation of the work as he does the keying. The product of the keyboard is a punched paper ribbon which in turn drives the Composition Caster. The Comp Caster casts individual letters, assembles them into words and lines, and delivered completed lines to a galley for subsequent makeup, proofing, corrections, and ultimately, printing. 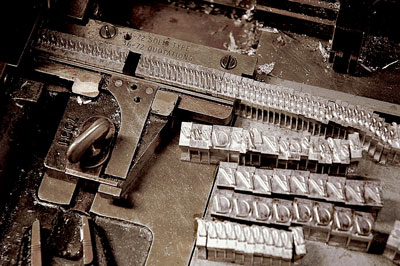 In more recent years Rich has adopted a caster interface created by one of his former Monotype University students, Bill Welliver,. Bill’s device enables keyboard work to be done on a MacBook computer which, in turn, drives the Monotype Composition Caster by controlling the air valves previously controlled by the paper ribbon. Virtually no modification is necessary on the Composition Caster to allow it to be driven by the computer.

The body of the form was composed on the Monotype Composition Caster, which, though it produces justified lines of type, each line still consists of individual type letters and spaces and could be altered (corrected?) by hand if necessary, just as hand-set type can be reworked. 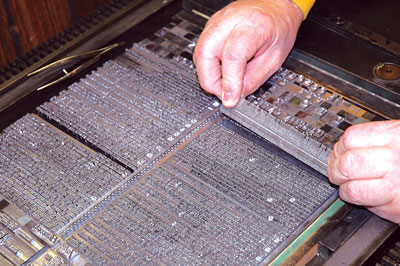 The complete form was placed in Rich’s Vandercook press so a full proof could be made. After proofreading and corrections are finished, the lines of type and initials which were to be printed in color were removed from the form and replaced with spacing material. The black portion of the form was first printed, followed by separate press runs for red and blue. Utilizing color has been the only liberty taken with the production of this reproduction of the Dunlap version of the Declaration of Independence. All other matters such as page size, relative size of all the type fonts, the original Caslon typeface was utilized, and all line endings, and the rare occurrence of errors in the original document were painstakingly reproduced rendering the best possible replication well over two hundred years after the form was first printed. 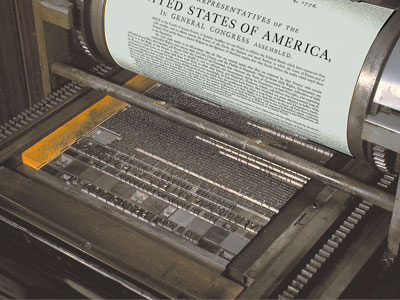 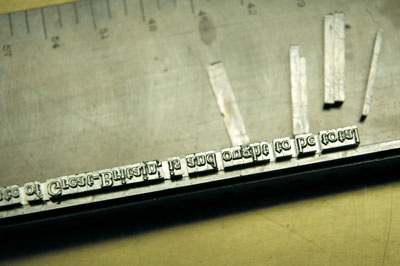 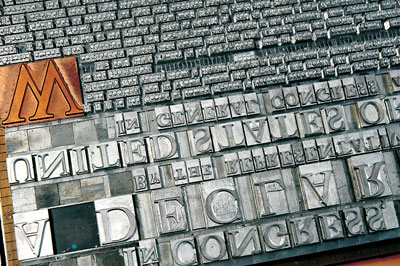 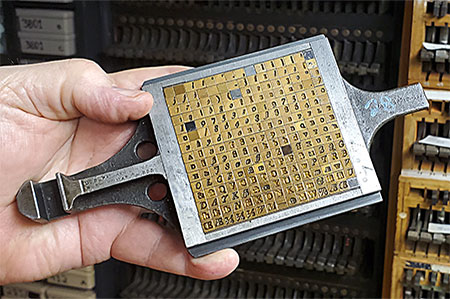 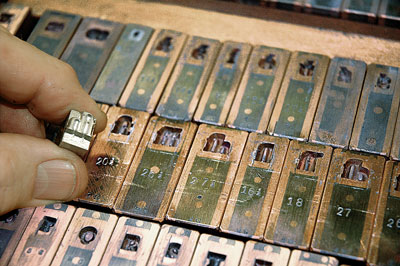