The experience of working with with metal types for over 40 years enabled me to attempt this historic reproduction from the early 1800s. I needed to have the necessary implements for casting the individual types and the skill necessary to build up the form—just as it would have been done in the heyday of hot metal typesetting (which ended in the 1960s). But I also needed a knowledge of typography of the early 1800s, and familiarity with typesetting practices as they existed near the turn of the nineteenth century. 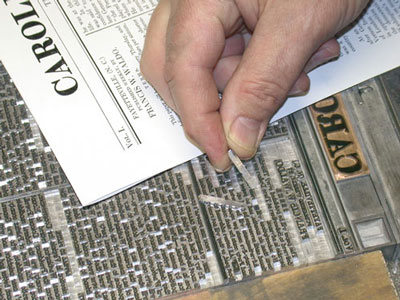 Significant changes in typesetting had occurred since the Revolutionary War and in the English language in general, for around 1800 the now-strange-appearing long s and its associated ligatures were dropped from the alphabet both in the U. S. and in England. Likewise, the traditional oldstyle type designs of William Caslon had gone out of vogue in favor of so-called “modern romans” with their greater contrast between thick and thin strokes, and finer serifs. Thus, we find the Carolina Observer decked out in a modern roman typeface (although it still retained some eccentricities of older designs). This is especially evident in the swash italic capitals A, M, W, Y, N, etc.

Punctuation Style of That Era

Compared with modern practices, there were significant differences in procedures for punctuation. Back then they “double-spaced” after a period, a colon or a semi-colon. Remnants of this now-obsolete style remained into modern times especially with typewriter instruction in the late 20th century. Another obsolete “style” was the insertion of extra spacing before the colon, the semi-colon, the excalama­tion mark and the question mark. And finally, it was “style” to put space between quotation marks and the words they enclosed. Fortunately, I was able to modify my Monotype matrix case and keyboard in a way to mimic all of these obsolete procedures and thus, match in a very precise fashion the original document. Oh yes, the Monotype also allows usage of small capitals, which were utilized throughout the Carolina ­Observer as subheadings. 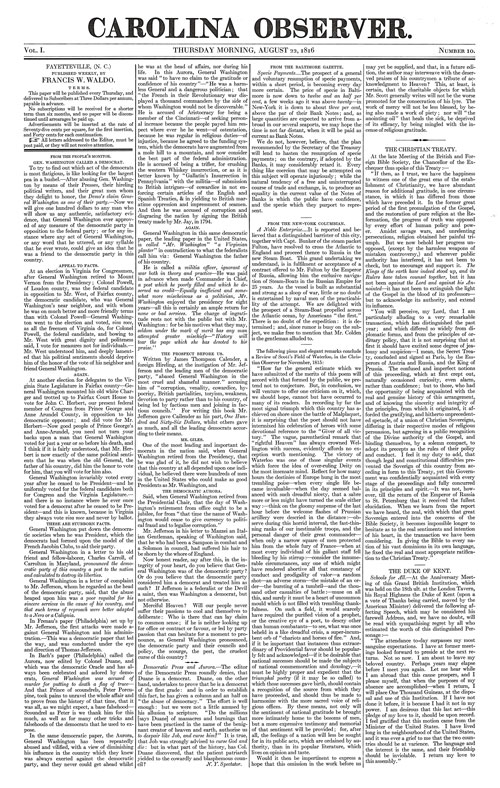 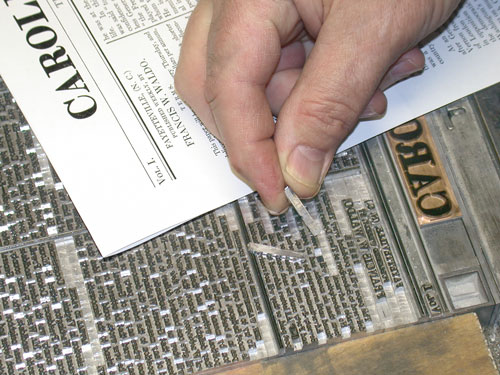 Last-minute alterations are made in the form of the Carolina Observer, an historic typesetting project which has re-created in individual metal type characters the entire front page of a publication first issued on Thursday Morning, August 22, 1816. The form is displayed in a Columbian press in the looby of the Fayetteville (N.C.) Observer, successor to the earlier publication.

Most likely the original nameplate was also cast printers type. However, the specific design has long-since been reworked significantly and no longer is available either as type or as matrices. Thus, I “cleaned up” the original specimen utilizing Corel Draw computer software; I had a copper engraving made from my Corel Draw file. The engraving is a very close match to the nameplate found in the original publication. Thus, from a distance my typographic rendering is a very close match to the original publication as to both its content and its typographic appearance. The one major item which I could not replicate was the very apparent wear evident on the type utilized in the 1816 document. Since all the type I made for this project was new, my proof of necessity appears cleaner and lighter. 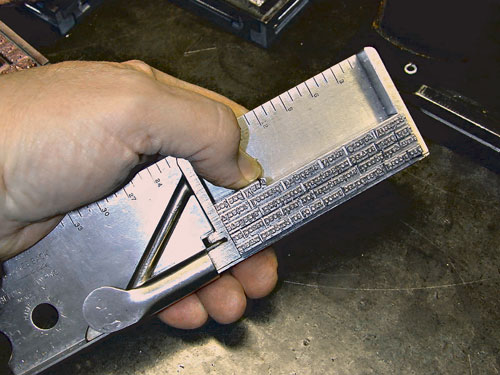 Setting type by hand was still a profession into the 1960s. This is a modern composing stick with four lines of assembled type therein.

The Quality of the
Original Document

Of course, every single letter in the original document was composed by hand, one letter at a time, in the very labor-intensive manner which characterized all typesetting until around 1900. But still, the document is very well proof-read. Only about five obvious errors were discovered, and only once was there an inverted letter (an “n” is inverted and thus appears to be a “u”), which is both testament to the accuracy of the persons who set the type, and to the serious attention given to proofreading back then. Only two lines reveal errors directly related to a person getting distracted while setting the type. In one place a word is duplicated in the same line, and in another instance, the last word of one line reappears as the first word in the following line. 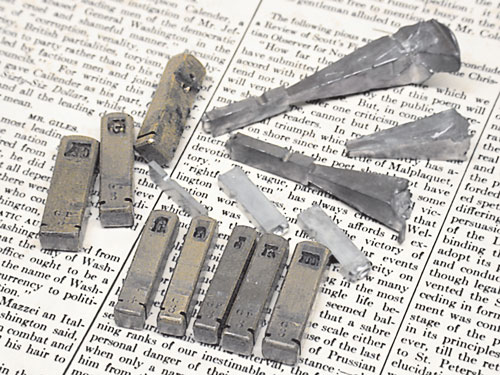 Vintage typecasting matrices and some unfinished and finished casts. These are “great primer” size (roughly 18 point) and were not used in this project. But they do reflect on entirely manual process in vogue at the time this publication first was printed.

The only known early copy of the Carolina Observer is found in the archives of the American Antiquarian Society in Worcester, Mass. That copy has become quite brittle and has fallen apart at the folds. Thus, photo reproductions of that sheet have several areas which are simply not decipherable. When this project was undertaken, I contacted Marie Lamoureux, head of readers’ services at the Society, and asked if she could either make a very close check of the original document or possibly find the source newspapers named in the Observer, as an effort to “fill in the many blanks” where the original could not be read. To my great surprise, she was able to piece together the broken parts of the document and decipher all questionable areas excepting the lower right corner, where about three words were simply “gone.” I made a studied attempt at fitting my best guess as to what those words might have been, and inserted them to complete the document. 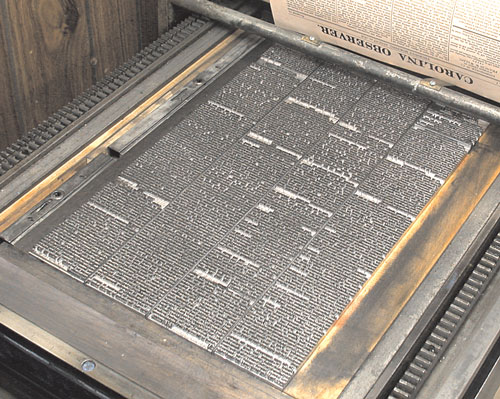 The complete typeset form locked in the bed of the Vandercook press in preparation for final proofing.

Typecasting Technology
Of the Early 1800s

Another reference to the antiquity of this document relates to the actual type utilized. At that time, typecasting matrices all were engraved by hand. A skilled ­engraver could do only three or four matrices a day. Casting from these matrices was done one letter at a time utilizing the hand mold, a technology which dated to the origin of printing in the mid 1400s. Automation in a very primitive initial form did not come to typecasting until about 1836 and mechanical engraving of matrices didn’t ­become widely used until near the beginning of the 20th century. Thus, it is almost certain that all the fonts originally utilized in this publication were declared obsolete and discarded over 150 years ago; for that reason, a ­precise match would be impossible.

My equipment is all Monotype equipment rather than Linotype equipment, allowing me to cast and compose individual letters (rather than lines) precisely imitating the practice of hand composition. This system was developed around 1886, but not perfected and made available to the printing industry until around 1904. I have been collecting this equipment since the early 1970s. Since Monotype matrix “cases” are relatively small, often they were retained by their users even when the styles of the letters they represented went “out of vogue.” This is fortunate, for in the realm of the Linotype, where a font of matrices consumed a large amount of space, older fonts tended to be junked for their value as scrap brass. Thus, I have matrices for various faces which went out of style in the early 1900s—faces which often represented designs which had been popular in the 1800s.

Thus I have re-created the original page from the Carolina Observer into metal types in the 21st century, utilizing 20th-century equipment, and very closely mimicking the original, which was produced utilizing tools and implements of the very early 19th century. In this way we have prepared a page form to be placed in a historically correct Columbian press, for permanent ­display in the offices of the Fayetteville Observer—a modern-day daily newspaper which traces its roots directly to the Carolina Observer. I congratulate the newspaper for its strong desire to have this project with as much historic accurately as possible, so as to allow for a very legitimate display of its early work heritage for future generations to study and admire.