Reproduction of First Printing of U. S. Constitution

Rich is reviewing a two-pieced proof of the Constitution prior to sending the form to Provo, Utah. The form ended up being larger than what the Vandercook proof press would hold, necessitating a proof in two parts. 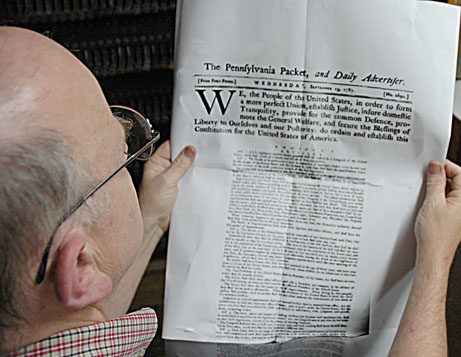 Delegates to the Constitutional Convention signed the Constitution in Philadelphia on September 17, 1787. The fifty-five delegates who signed this monumental political document were the best minds of the Colonies at the time. The Constitution was forwarded to the Congress and the following year was ratified by conventions in nine states, which made it the law of the land.

Two days after its signing, the Pennsylvania Packet and Daily Advertiser printed the entire text of the Constitution in its issue dated Wednesday, September 19, 1787. John Dunlap and David C. Claypoole were publishers of the Packet at the time. The two men alternated as official printers to the Continental Congress. 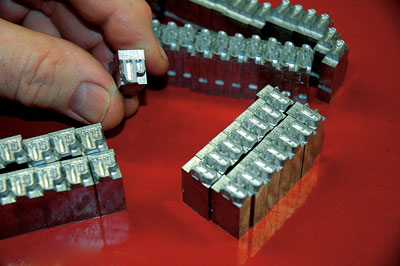 All long s characters and ligatures were independently cast on the Supercaster utilizing original ATF matrices. Remainder of the form was cast utilizing Lanston Monotype matrices. The two combined flawlessly.

The strange appearance of the newspaper on that date was necessitated by the fact that the document itself was standing type set up to fit a significantly smaller page size. This was so because printers of the newspaper also were printers to the Congress and had previously composed the forms as the document was developed by the Convention. Rather than re-set all the type, the publishers opted to set the Preamble in very large type, filling the newspaper page width, but subsequent content was “floated” in the center of the big page simply to avoid resetting all the type. 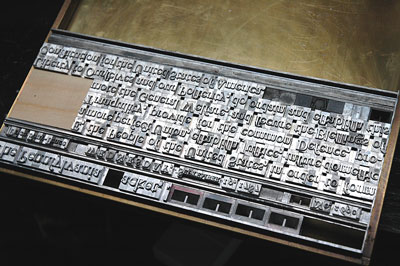 The newspaper’s nameplate, shown here partlyfinished, along with the Preamble to the Constritution, were set up in a large galley. The Preamble was set in 36 point type at full measure.

It must be pointed out that the original parchment document on which the Constitution was written was in the custody of the Department of State. Of necessity it traveled with the federal government from New York to Philadelphia and, finally, to Washington. In order to allow citizens in all parts of the Republic to read the Constitution, its entire text was printed in the newspapers of the day.

In similar fashion an exact-size reproduction of the first public printing of the U. S. Constitution was cast, composed and the huge form was provided to the Crandall Museum in Provo, Utah, in 2006 by Rich Hopkins. Only the first page of the newspaper was reproduced. 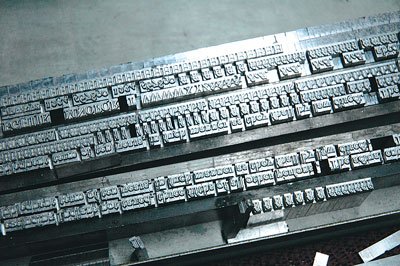 This assortment of sorts in 12 point was cast for use in making corrections to the typeset form. Especially included here are the various long s characters and also the ct character.

Dropping in the long s character in the word Advertiser, using 48 point Caslon Italic, cast from original ATF matrices which date back to about 1860 and the Johnson typefoundry in Philadelphia.