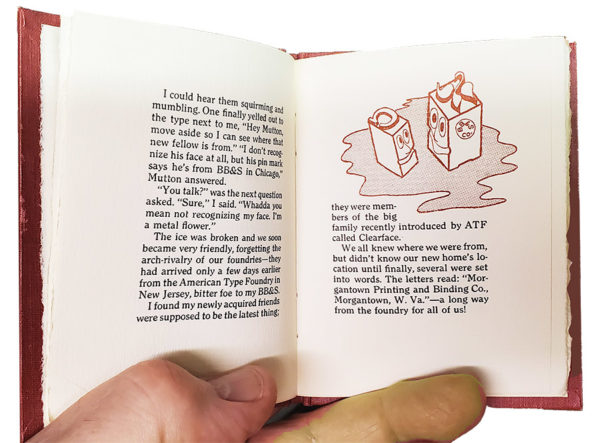 Autobiography of a Metal Flower

This is a semi-miniature book (sized 3 1⁄2 x 4 1⁄2″). It was first published in 1965. It was handset using a font of 8-point Clearface cast long ago by American Type Founders—a font rescued from a barrel of miscellaneous type and junk bought from a local printer. The metal flower, subject of the autobiography, was found in that barrel.

The book, written by Rich Hopkins, contains 24 unnumbered pages and includes five illustrations done for him by his mother. It was completed just as he received orders for overseas duty in the U.S. Army. He and his wife finished binding 45 copies at Fort Bragg, North Carolina. They were sent to all who had placed advanced orders just as he left for Vietnam. The balance of the press run had been stored away for 27 years when he happened across the box in 1992. At that time a quantity of the unbound pages was sent to Campbell-Logan Bindery where additional copies were completed. Only a few copies remain at $40.00 each including postage in the USA.